When I was looking up race times for my last post I encountered the photos from last year’s First Day 5k. I shared them on social media on Tuesday, but there was far more to say than I could fit in an Instagram caption. I had a LOT of feelings when I first saw the pics and compared them to the ones from this year. 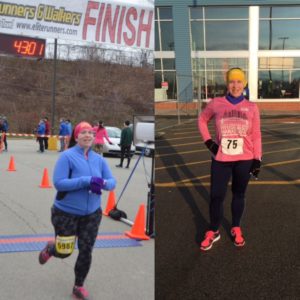 Not all of them good. My first reaction was admittedly not ‘wow’ and feelings of pride in how far I’ve come. I don’t remember being that big, for one, I was surprised when I saw the pictures. But I do remember how unhappy I was–not so much in or with my body, but just in general. I’m definitely someone who eats their feelings so periods of my life where I’m heavier are generally periods where I am struggling to deal. I was also just running races for the sake of running races at that point. I had fallen out of love with running and it would be another 6 months or so before I started to love it again. The second thought was still not ‘wow’, but more disbelief. ‘Sure, I look good in comparison, but…’ was my reaction as I was very much still spinning my wheels about the progress frustration I’d discussed the Focus entry. Yeah, I look good in comparison, but I’m still not where I think I should be. And that’s very much the headspace I was in when I posted it on Tuesday. I didn’t post it right away, and I was a little uncomfortable when I did. The nag at the back of my head wasn’t ready for compliments and way to go’s, her response was ‘yeah, but…’ and I think that’s what came through in the caption. Still, a part of me knew that I needed to put it out there, so I did.

Today the universe forced my hand–I woke up with pink eye and had to call off of work. Not what I wanted at all, my workaholic side was pretty pissed in fact, and if working from home was an option I would have been doing so today. Which is why the universe forced my hand and made me take a break. I did stuff around the house, went to the doc and the pharmacy (obviously), and I’ll be getting my Insanity workout in because I’m fine besides my eyeball, but I also took a nap and took advantage of the unexpected down time to try on some old clothes. Like I said in my Focus post–I feel tighter and leaner despite the scale and so I needed to see if there was any progress that I could actually see for myself. I didn’t have my hopes up, I wasn’t expecting much of anything, and maybe that’s why I got a pleasant surprise. Most of the things that I haven’t been able to wear for a couple of years were still tight the last time I tried them on. But today way more of them fit than I expected. Not everything, but a lot of things. And I was kind of floored by it. 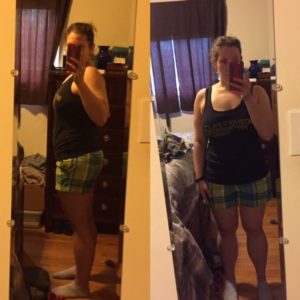 I wore these shorts on my first date with my now husband. Pretty sure that was the last time I wore them. I’m still about 10 pounds heavier than I was then so I couldn’t believe that they fit. Husband pointed out that I’ve put on a lot of muscle since then. And it finally clicked. My composition is shifting, so I’m heavier but smaller all at the same time. Duh. Still a work in progress–I’m by no means where I want to be, I’m still chasing my optimal racing ‘weight’, though I realized that I need to focus less on the scale and more on other means of measurement as it’s going to be skewed at this point. It also means that in order to progress I need to really tweak my diet because I’m closer to my ‘goal weight’ than I previously believed so I have to strike a more careful balance.

But more important to me in this moment is that for the first time in months I can see progress, and I feel really good about it. (And really disappointed it’s January and too cold to wear most of my reclaimed clothes…)