So I’m a little behind on the blogging–sorry friends, I’ve been using my morning time for some other things lately, I’ll do my best to get caught up here shortly. First and foremost I need to write about this year’s Pittsburgh Marathon weekend.

While all of my training is ultimately building towards my ultras (the first of which is just under a week away, *gulp*) the Pittsburgh Marathon was a goal race of mine this year. I wanted to PR at this marathon. That’s a tall order–Pittsburgh is known for being a tough course, most people don’t choose races with significant hills to shoot for PRs, but I’m also not most people. Pittsburgh is my half marathon PR even though I’ve done a lot of “easier” races, I wanted Pittsburgh to be my marathon PR too (at least for now).

So the Expo and the 5k were not remarkable. Sorry, they just weren’t. I visited my favorite shirt shop (shout out to Brag Swag…LOVE their stuff) and scored a couple new Pittsburgh designs, but very little aside from that. LOVE the official shirts this year, LOVE the Pittsburgh skyline Goodr sunglasses that we got as our premium. I used to love race expos, now I’m much more of a get in, get my stuff, make a lap, get out type of girl. The 5k on Saturday, was a 5k. I took it easy since it was a shakeout and not the race I was there for.

Sunday…oh Sunday…the main event. Met up with my friends in the morning. Little stressful getting us all to the starting corral–we seem to have different views of “on time” and when the event “starts” but it ended up being fine once I got my anxiety back in check. The group of us did our “Who Run? WE RUN!” chant which was fun. I ran the first 16 miles with my friend Lara. Ran up Forbes (which had been one of my goals). Got to watch BRF dance like a jagoff with the girls at Lululemon (my only regret is that I didn’t record it…it was EPIC). Had some beer. Pet some greyhounds (wanted to run with one but they were too cold and wet when I got there). Lara urged me to go at mile 16–she could tell I felt good and she was struggling. So I went off on my own and chased down my PR. Enjoyed seeing friends and my running club along the way (that Fireball at Mile 25 was EXACTLY what I needed for the final push). And then I crossed the line.

5:23:19. 15 minutes faster than my marathon in March, on a much more “difficult” course. 20 minutes faster than my first marathon, which had been my PR until this year. That expression on my face is pure joy mixed with tears that were about to come a second later. I look vaguely horrified, but I LOVE that picture because I know how I felt in that moment. I was proud and happy. I felt amazing. This was far and away, of the 9 marathons I’ve run (so far) in my life the best I had ever felt during and after the race. It was the most fun I’ve had at a marathon. I posed for a pic with my medal. I got my medal engraved. I rang the PR bell (at BRF’s insistence). It was a truly awesome day.

And now…my next adventure awaits. Eagle Up Ultra 100k is this weekend. Yeah, 100k. I’ve been saying 50 miles for the longest time, but my goal is 100k. I can’t wait to get out there and see what I can do. I can’t wait for a long weekend with my friends, spending literally an entire day running. I had a really great 30-mile training run a few weeks back and I’m hoping that will be a good preview of coming attractions. I’m going into the weekend feeling really strong and well-prepared, so I guess we’ll see.

I started this post last week, but the cold I’d acquired really kicked my butt and I couldn’t even get through typing it on Monday morning before I dragged myself to work.

I have really been looking forward to these races. I ran the Ugly Sweater Run in Pittsburgh last year with friends and it was so much fun. It didn’t come back here, but when I saw it was in Cleveland that seemed like a good excuse for a weekend trip. Then I found out the A Christmas Story Run was the day before. Sold. Unfortunately I caught a pretty wicked cold right before the trip which dampened my enthusiasm some for the weekend, but still…it was a lot of fun.

Headed to Ohio on Friday so we could hit packet pickup for the first race–A Christmas Story House run. No issues navigating in Cleveland (because it’s a grid built on a square…unlike our beloved Pittsburgh). Spent some time with my parents, then went over to Kel and Erik’s to have our pre-race dinner, a couple of drinks (because the pre-race beer has re-entered my life) and crash for the night.

Saturday morning we got up early, prepped, got out the door so we could find our way and make sure to get parking before road closures could become an issue (they wouldn’t have been for us, it turns out, but we didn’t know that). We were really early, and the lights were still on downtown, so Andy took some pictures of me before we went to Tower City for the SCRR photo. 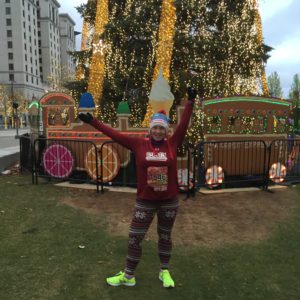 I started off great. I had energy, I was feeling good. I started with the 10:30 pacer (who was awesome) and stuck with him the whole first mile without much issue. But by mile two the sickness started to rear its ugly head and I was started to get depleted. I had to walk a few times. Cheers from fellow SCRR members helped as we passed each other along the course. It was a fun race, though, and I would totally do it again. Wish I could’ve seen more of the house (the actual house from A Christmas Story is the 5k endpoint and 10k turnaround) I thought about stopping for a selfie with it–pretty sure my time was already screwed because I’d had to walk, and this was supposed to be fun and not matter–but at that point I was running pretty well so I didn’t want to break momentum. So I kept going. The last bit of the course was rough for me, but I pressed on best I could manage. And ultimately I’m glad I did–I pulled out a PR! Only 5 seconds, and I’m reasonably sure the course was a little short, but hell it’s an official time on a course labeled 10k, so I’m going with it.

I was super depleted after the race, so we hightailed it back to the car and headed back to Kel & Erik’s. We got showered and such then the four of us went to lunch at FatHeads. So Good. Really hit the spot. Then we split ways and Andy and I went to pick up our packets for Sunday’s race, do a little shopping, then went to my parents house to help mom get ready for dad’s surprise party. I really could’ve used a nap, but it just wasn’t in the cards. We had a successful surprise 70th birthday party for my dad (and his twin brother). Then we headed back to Kel & Erik’s for the night.

Up and at ’em again on Sunday, not quite as bright eyed and bushy-tailed as I was on Saturday but good enough. This race was at the Cleveland Metroparks Zoo, which was admittedly a big part of the appeal. I love the zoo. Huddled in the info center to stay warm before the race and took some more pics while waiting for go time. 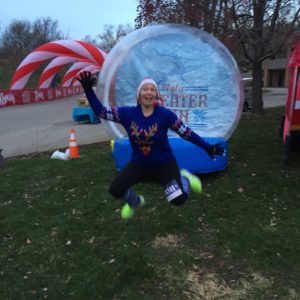 The Ugly Sweater Run is billed as a 5k, but it isn’t timed–it truly is meant to be a fun run style event. I didn’t even start off as strong as I had the day before, I was definitely drained from the sickness, so I was really glad that there was no timing so there was no pressure at all for me to perform well. The course was also really short, definitely not 5k–Garmin clocked it about 2.75 miles. But again, it was a fun event. I liked it, I would do it again, especially at the zoo (or Pittsburgh, it was cool here too, and much closer to a real 5k). And this year there were medals! We got sweet medals for both events, which was awesome, because I am ALL about that bling. 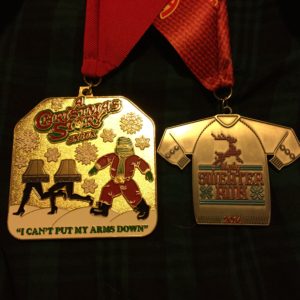 Next up is our New Year’s Double Header–the Harmon Silvester 5k on New Year’s Eve and the First Day 5k on New Year’s Day–because I can think of no better way to cap off this year and start next year than by running. Working on my training plan for the first part of the year and trying to get some races scheduled and on the books. It’s going to be a little intense, possibly INSANE, but I need to challenge myself to get where I want to be. More to come on that as it unfolds.

Also worth noting, I had to break my run streak. I made it 14 days, then my knee started acting up and I literally could not run. I rested a couple days and was fine. Then ran one day, but the last bit of chest congestion killed me. Yesterday I felt really lousy so I missed my run. I think I’ve just about kicked it though, so I’m going to start again. I’d rather keep trying and falling short than not go for it at all. Don’t give up. Just keep pushing.