So my attempt at two a days was laughable. Did two workouts on Monday–Insanity in the morning and a speed workout at the track after work. Was super duper sore on Tuesday. Like cancelled kettlebell class sore so I would have a shot at running at the group run on Wednesday. And that run was rough, but I got 4 miles done. Rested on Thursday. Liberty Mile on Friday night, then an impromptu 5k with my best friend on Saturday morning in Ohio. Pushed my long run to Sunday morning at Open Streets, but had to cut it short because my hip was not having it.

It’s interesting, though. Friday night at the Liberty Mile I didn’t do as well as I had hoped. I really wanted a sub-9 mile, but knew it was a long shot. I’ve literally done that one time on a treadmill, and road is vastly different. I was hoping for low 9s if I couldn’t break it. That didn’t happen either. 9:45. Totally respectable for my first mile race, and I gave it everything I had. I didn’t hold anything back, so if that was the best I could do, that was the best I could do. I was literally cramping as I walked from the finish to the bag drop area. Can’t ask for more from myself. After my heat I stuck around to watch my buddy run his race–and he killed it, of course. Then we went for our post-race free beer and it got interesting. My buddy is faster than me–that’s part of why I like training with him, he can push me like no one else. He was running in the masters division–sub 8 minute mile. And over beer, he challenged me to beat his time from this year at next year’s race. I hemmed. I hawed. He told me it was yes or no. I can’t back down, so I said yes. Then we got our official times. He put up a 7:48. Basically 2 solid minutes under where I finished. *gulp* WTF did he talk me into? 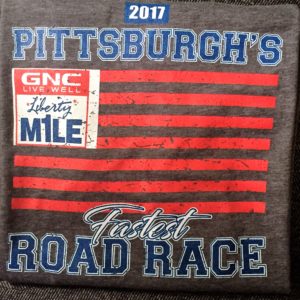 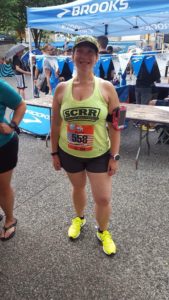 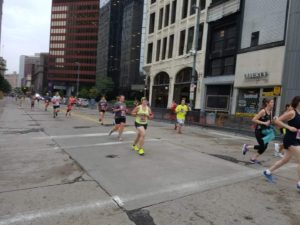 pictures from Liberty Mile on Friday…

Here’s the thing though, yeah, that’s a challenge. A big one. It won’t be easy. BUT–he wouldn’t have put it out there if he didn’t think I could do it. He’s a good friend and a great training partner (though we rarely actually run together…). He knows I wouldn’t back down from it, but he also wouldn’t intentionally set me up for failure either.  And the fact that I’m going for it will push him to do better–because he still wants to be faster than me.

Saturday I got up at the buttcrack of dawn and drove out to Ohio to run a 5k with my bestie and her husband (and their baby girl). She’s run all her life, both track and cross country, she’s coached both, needless to say, she’s also faster than me (even when coming back from injuries, and even with a baby jogger). Much as it killed her, she stayed true to her commitment to run the race with her husband, so for what will probably be the ONLY time in my life, I finished ahead of her. And the race was so small, that I actually snagged 2nd place in my age group–holla! That was a first for me as well. Definitely not my best 5k, not even a course PR for me (I’ve done this same course at a different race a couple of times), but I had a good time and got some quality time with some of my favorite people (which was the whole reason I went out in the first place). 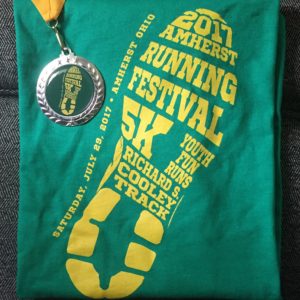 shirt and second place age group medal from the 5k

Sunday, I was planning 10 miles at the final Open Streets of the season. Open Streets is an initiative to get people outside and active in Pittsburgh, three times each summer they take a stretch of roads branching through several different neighborhoods and shut them down to traffic for a few hours on Sunday morning. You can bike, walk, run, skate, shop, take fitness classes, eat, socialize, etc. It’s a really cool event and draws a lot of people. This was the first one I made it to, and I will definitely be putting them on my calendar next year. Unfortunately, my hips had other plans–I ended up walking a lot, and cutting it short at 7. Can’t pinpoint where it went wrong–I always run a mile on Friday nights and it’s usually chased by a kettlebell class, which I didn’t do this week. I’ve done several back to back races–5 or 10k Saturday and 10 miles or half marathon on Sunday–so it’s not running 3 days in a row or trying to run long after a race. But something was off. I’ll need to work on that for my long run next weekend. 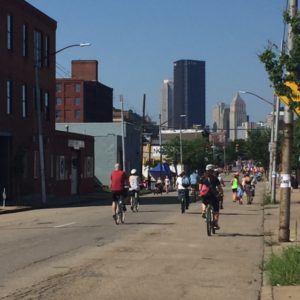 view from Open Streets (this was a less crowded moment)